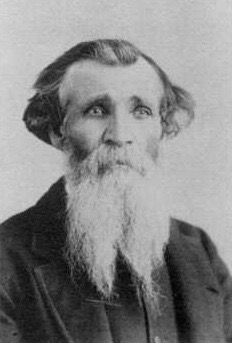 Nineveh Ford was interviewed in 1878 about his role in western expansion. He was the brother of John Ford, and uncle of Ephraim Ford.

Early in the spring of 1843 the emigrants bound for Oregon began to pour into Westport and Independence.After the majority were gathered together and just prior to beginning the journey, a meeting was called to forma set of “traveling” rules and to elect a council of nine to mediate any disputes that might erupt. It was decidedthat it would be best to elect officers when the train reached the Kansas River.

On May 22, 1843 the Oregon Emigrating Company departed with John Gantt as guide. Gantt had attained the rank of Captain in the US Army and had made his living in the fur trade and was more than willing to guidethe train to Fort Hall for $1 per person. At Fort Hall it was hoped that assistance could be obtained from Dr.Marcus Whitman and party on as they returned to the Oregon country from the states.

On June 1, after completing the crossing of the Kansas River, elections were held to determine who the officers were to be. Each nominee moved out with his back to the company. Backers of an individual then lined up behind their favorite candidate creating several lines of men stretching out across the prairie. The leaders, in jest, then proceeded to run across the prairie with their lines of supporters following like a long tail. The strange sight was captured in print by a writer passing by with the Sir William Drummond hunting expedition who remarked that, “Running for office is certainly performed in more literal fashion on the prairie …..” After the merriment, the end result was that Peter Burnett became Captain and James Nesmith was elected OrderlySergeant.

As was true of each emigration, the exact numbers varied from person to person. According to an interview with Ninevah Ford in 1878, “We rendezvoused at West Port west of Independence, Jackson County, Missouri.We started from there in April. There were between 500 and 700 souls in the party and 113 wagons…….”.However, John Arthur in 1887 at an address of the Oregon Pioneer Association, stated that “the emigratingbody numbered over one thousand souls, with one hundred and twenty wagons drawn by ox teams and overthree thousand head of loose cattle and horses.”

The company was soon to be involved in several severe storms that left them waterlogged and axle deep inmuddy quagmires. Adding to the complaints, was the dissatisfaction created between those who had cattle andthose who did not. After much dissension, Peter Burnett resigned. William Martin assumed command of thecompany without loose cattle. Jesse Applegate was elected leader of the “Cow Column”, which consisted ofapproximately 60 wagons and a couple of thousand head of cattle.

Following behind was Joseph B. Chiles, a pioneer of 1841, who was returning to California leading a smallgroup of family and friends.

As with emigrations to follow, these rugged pioneers dealt daily with adverse weather conditions, lack ofprovisions, conflict of personalities and illness. To add to their afflictions, they did not have a wagon trail tofollow. For a more comprehensive study of the emigration of 1843, I recommend reading “Blazing A WagonTrail To Oregon, A Weekly Chronicle of the Great Migration of 1843” by Lloyd W. Coffman.