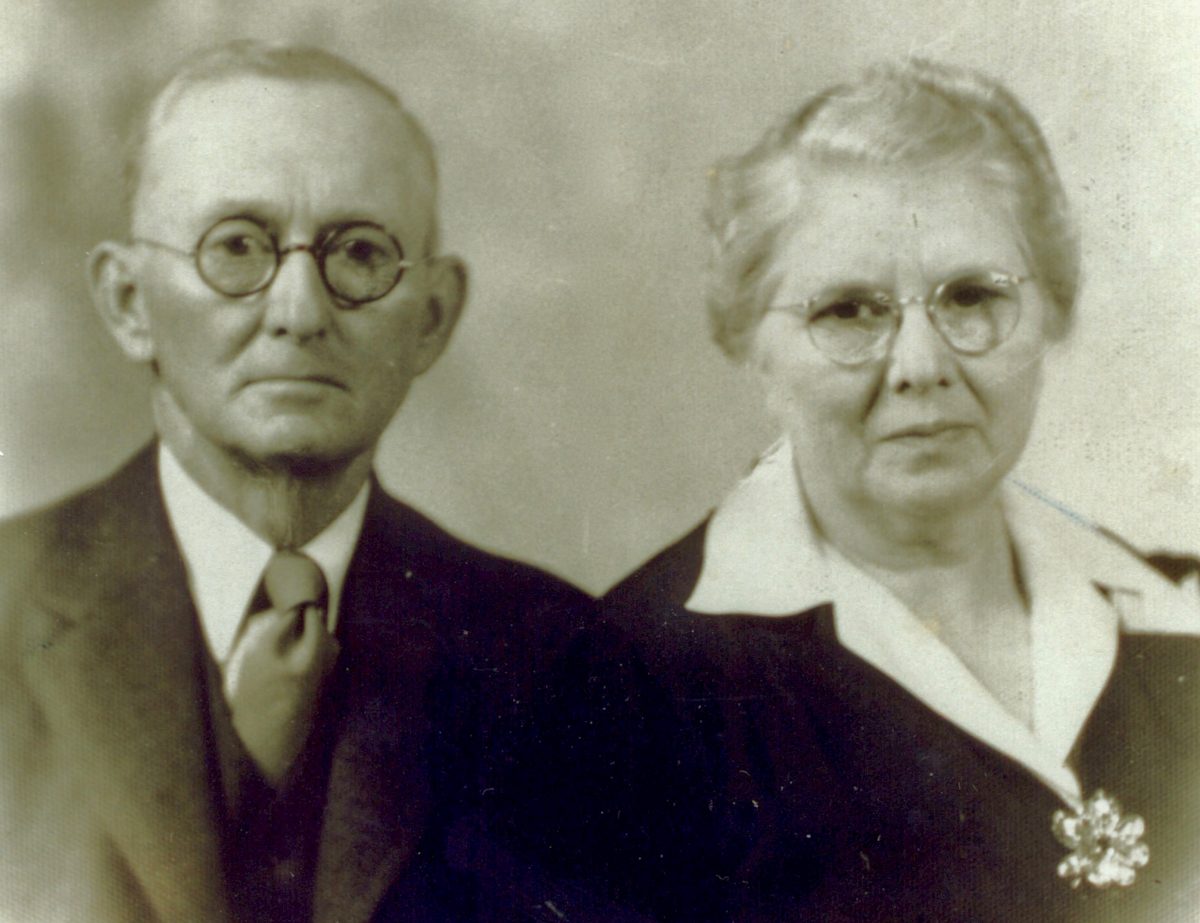 Claude Lester Wagoner and Myrtle Ford were married on January 17, 1904 in Milroy in Orange Township of Rush County, Indiana.

Claude was sort in height and medium build, with grey eyes and light brown hair.

They first rented a very small T-shaped house in Orange Township, Rush County, on the south side of CR550S between CR650W and CR725W and just east of the jog in the road. This is between Homer and Moscow near Gowdy.

In the 1910 census, Claude Wagoner (27) was farming in Orange Township. His household consisted of his wife Myrtle (24), sons Huston (5) and Herbert (4), and daughter Mabel (1). Myrtle’s sister Mabel (26) and her husband Charles McFatridge (28) were listed in the census on the same page, so they were either living very near Claude and Myrtle, or were living with them. 

Mabel loved school, and resented when her mother made her stop school after eight grade to stay at home and help raise the younger siblings.

In July 1915, a bad storm blew several of Claude’s fruit trees down. Some large limbs blew into Clyde Wagoner’s home nearby.

In 1916, Lester Ephraim Wagoner was born.

In August 1919, Claude had 100 chickens stolen by robbers. He and some neighbors tracked the vehicle to a nearby house and found the two high schooler robbers. The two boys eventually admitted to the crime.

They then moved to a farm near the town of Carthage in Ripley Township, where Mabel went to school in Carthage and met her life-long friend, Valetta. They lived in a big house at the end of a long straight lane that went up a hill. In the 1920 census, Claude (37) was farming in Ripley Township, with a household consisting of his wife Myrtle (32), and children Huson E. (15) working as a farm laborer, Herbert G. (13), Mabel D. (11), Basil G. (9), and Lester E. (4 1/2).

Claude and Myrtle were active members of the Methodist Church in Gowdy.
 

On November 25, 1945, Herbert, died in a tractor accident. It is believed he fell asleep while driving the tractor, and fell off, and was then further injured by the rolling tractor and wagons.

Claude then moved back to Orange Township and rented a farm in the southern end of Walker Township, on the west side of CR650W and less than a mile north of the first house on CR550S. The farm had a very large house, a nice barn with milk cow stalls, and a hickory woods to the south. It was owned by a Mull, who also owned the bank.

Mr. Mull fell on hard times financially, and borrowed $3,000 from Claude. Mr. Mull lost the money at the bank, and never repaid Claude. The farm went into receivership, and was bought by a Mr. Parker. Claude and Mr. Parker had a disagreement and Claude decided to move.

They rented a two story house in the nearby town of Manilla on the north side of the main street, and Claude farmed about 100 acres of farmland immediately north of the house. After about two years, Mr. Parker asked Claude to rent the Mull/Parker Place again.

The last farm they had was the Scull place on SR 244, on the south side of the highway, and stretching between the Flat Rock River bridge on the west to about 1/4 mile of CR500W on the east. They lived there for a number of years until Claude retired.

In 1950, Claude and J. T. Scull auctioned off livestock, equipment, and household goods from the Scull farm.

Claude and Myrtle then purchased a nice little bungalo a few miles southwest of the SR 9 bridge over the Flat Rock River.

In the photo above, Claude is holding Fred Gahimer, his grandson. Claude was a soft-spoken, kind-hearted man who Fred enjoyed visiting.

In November 1943, Claude was elected to be the local representative to the county Farm Bureau convention.

Claude and Myrtle bought a house in Manilla.

Claude died in his home in Manilla on June 28, 1960 of cerebro-vascular accident (i.e. stroke) as a result of arteriosclerosis.

Claude and Myrtle are buried in the Moscow Cemetery in Rush County.